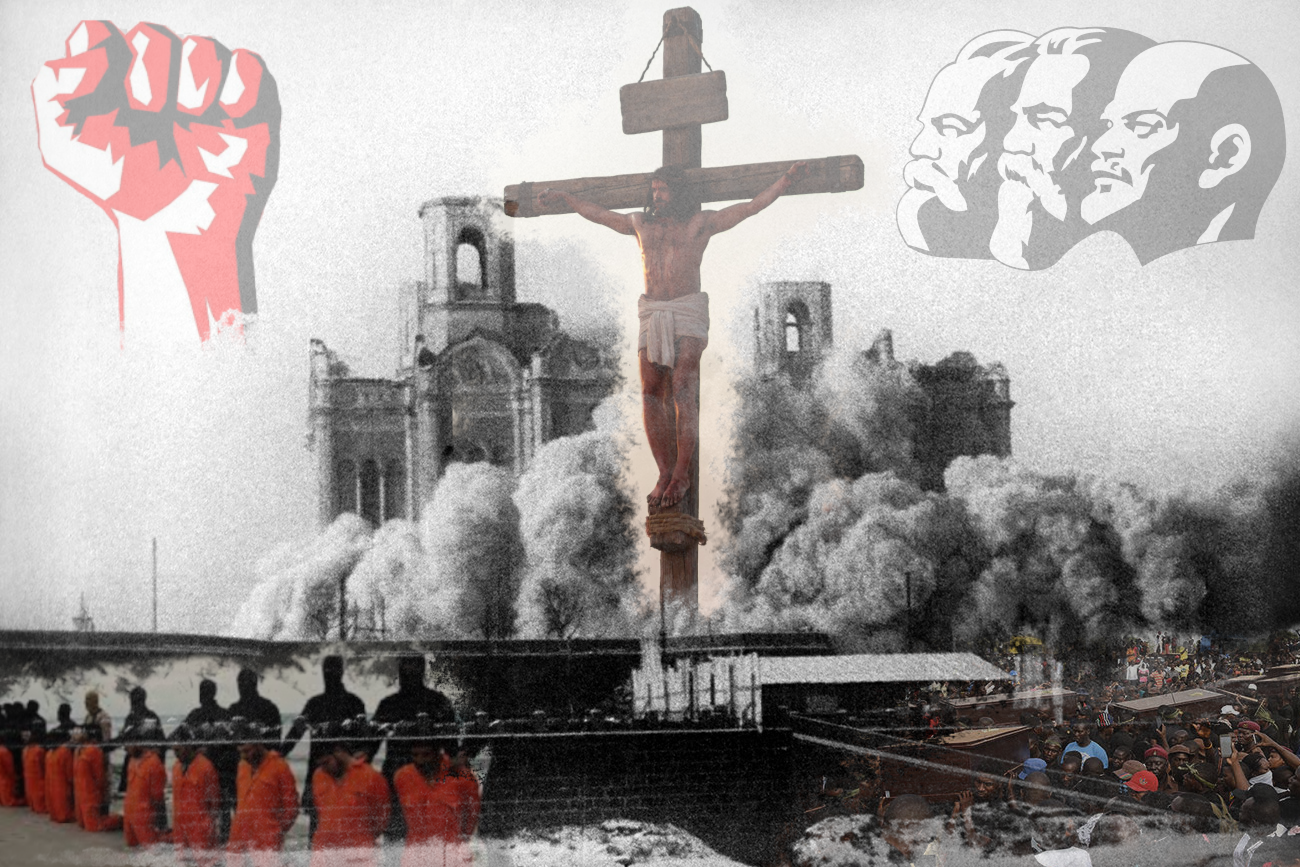 The time of peace everyone hoped for at the end of World War II was not on the minds of the Communist leaders in the Soviet Union.  Flush with victories…with the help of democratic nations…the Communists were ready to move on to the next phase of world domination.  Keep in mind that up to this point the church is still a barrier that would eventually have to be removed.  Stalin’s plan for expansion of Communism after the war involved three techniques:

>   The creation of pro-Communist puppet governments in occupied territory

>   The military conquest of new territory by satellite armies

As a matter of commentary when it comes to propaganda…how much damage can Russia do to our political system by making the opposing parties think Russia is involved in a US election when they actually have no involvement at all?  Have we seen anything recently that may involve such disruptive action?  Such propaganda can tie up the business of a nation so that real problems are not addressed.  What accounts for the phenomenal success of Communist efforts since the end of World War II?  How did the free world lose 100,000,000 people to the Iron Curtain?  How did the free world lose 450,000,000 more people through the conquest of China?  Did diplomatic blunders encourage the attack on South Korea?  After the Korean cease-fire in 1953 what encouraged the US to abandon a twenty-year policy of appeasement?  How did the FBI get involved in the ‘Battle of the Underground’?  Why did the US not do more to prevent the loss of French Indo-China to the Communists?  In the dispute over Formosa, why did Red China call the US a ‘paper tiger’?  What was the Soviet position on ‘peaceful coexistence’?  All of these questions resulted from the Communist execution of the plan for world domination.

The evidence of Communist subversion and aggression became quite apparent toward the close of World War II.  Even professional government bureaucrats who had staked their careers on the friendship of Soviet leaders began to sense a feeling of alarm.  Within a month after the death of President Roosevelt, Harry Hopkins, who was the Secretary of Commerce and had headed the Lend-Lease Program, made emergency arrangements to meet with Stalin in person.  At the time Hopkins was critically ill but forced himself to make this final pilgrimage to Moscow to try to salvage what was left of the post-war effort for peace.  When he arrived in Moscow, Hopkins was confronted by a blunt and angry Stalin. Stalin made an amazingly antagonistic verbal assault on the handling of the Lend-Lease program.  Hopkins was shocked as he thought of himself as being the best friend the Soviets had in America.  The Soviets were angry at the US for terminating Lend-Lease after V-Day in Europe.  (Sounds sort of what we experience when a person is kicked off welfare and expected to earn his/her own keep.)  Stalin could see no particular reason for the Soviets to even pretend to want fellowship with the United States.  Stalin even threatened to boycott the United Nations Conference soon to be held in San Francisco.  After Hopkins pleaded with Stalin to attend he finally agreed but he wanted Hopkins to know the he was doing the US a great favor. (As far as I am concerned it would have been better for the world for Stalin to stay locked up in the Kremlin.)  Hopkins returned home only to pass away in January of 1946.  Already evidence was apparent that the peace-loving nations were in for a violent and stormy era as a result of writing in the Soviets as full-fledged partners of the free world.

With occupied countries freed of Nazi powers Russia was well aware that if she were to expand her influence into these liberated nations , she would have to do it in such a way as to create the illusion that these nations had gone Communistic through their own political self-determination.  The plan…to make them ‘voluntary’ satellites through infiltration and subversion…just the way Satan operates in the lives of people, the society, and yes…the church.   In some nations this plan brought immediate results.  It made satellites of Yugoslavia and Albania almost over night.  Having captured their leadership of the anti-Nazi, anti-Fascist resistance movements during the war, as soon as these countries were liberated the Communists demanded the right to set up new governments.  Stalin tried to purge Tito’s regime but found it would not purge.  Tito temporarily pulled Yugoslavia away from the Russian orbit but remained openly devoted to Marxism in spite of generous US economic aid.  Red forces occupied all of Poland, Rumania, Hungary, Czechoslovakia, and most of what became East Germany.  The Soviet strategy for the ‘peaceful’ conquest of these countries prior to withdrawing Red troops was to encourage the creation of coalition governments including only left-wing parties.  The next step was to maneuver Communists into all key government positions.  The final step was to force all parties to join in a ‘monolithic bloc’ with the Communist leaders assuming complete dictatorial power.  Complete subjugation of all these countries was completed by 1949.  The Communist ‘Iron Curtain’ then came down on all western borders and the world found itself completely cut off from any contact with these former allies…representing approximately 100 million people.

After fighting the Japanese militarists for fourteen years, China had approached the end of World War II with high hopes.  The war had been fought under a dictatorship led by Chiang Kai-shek but his Nationalist Government had promised to set up a democratic constitution as soon as national unity would permit.  As the War ended Chiang Kai-shek ordered the restoration of civil rights and inaugurated freedom of the press.  Chinese leaders knew that their greatest threat to peace was the small but well-trained army of the Chinese Communists in the northwest territory.  Chinese leadership wanted to include all Chinese in the new democracy, including the Communists.  They offered the Communists full representation but required the disbandment of their armed forces.  Chiang Kai-shek even invited Communist leader Mao Tse-tung to come to the capital to see if they could reach a peaceful settlement.  After the meeting Chiang and his aides were not at all impressed with Mao’s superficial display of professed sincerity.

But an early blow for a post-war peace came when it was learned that back in February, 1945, British and American diplomats at Yalta had agreed to give Russia extensive property rights in Manchuria if the Soviets would join the war against Japan.  Chiang was outraged by the unilateral arrangement…China having not been consulted.  The Yalta agreement allowed Russia to come racing into Manchuria (and North Korea) just six days before the Japanese capitulated.  Russia’s occupation was typically brutal with Russia fixing a Communist grip on territory the Japanese had extensively industrialized…an area which was one of the richest agricultural regions in all of China…an area the Chinese Nationalists were expecting to use as the working base in bolstering China’s battered economy.  As Russia delayed removal of their troops from contested Manchuria the delay was long enough to allow the Communist Chinese to occupy Manchuria with vast amounts of captured Japanese ammunition and war material turned over to the Communists.  Consequently, when the Nationalists arrived to take over Manchuria, they were outraged to find that the Chinese Communists were already dug in.  Immediately civil war loomed as a consequence.

We need to remember that the Communists are experienced in patience and persistence.  If one plan doesn’t work then there is no discouragement to fall back and try another plan.  With the United Nations in its formative state the Communists saw an opportunity to move against a disorganized opponent.  The Communists saw themselves as liberators…their dominators being the only ones liberated.  Authoritarians rarely recognize their own authoritarianism.  To them, authoritarianism looks like simple virtue.  Because man is a threat to man, human beings seek safety and satisfaction in authority; because man is a threat to man, human beings seek the possibility of a remolding of man, a remolding to be achieved through the exercise of power.  Human beings, all too often, trust not in the moral authority of a God above, looking down benevolently on humanity, providing ethical guidelines for building fulfilling lives and rich communities.  Instead, they look to earthly authority of a king,  leader, an institution…even a dictator.  Remember, it took just a few weeks from the splitting of the Red Sea for the Jews to embrace the Golden Calf.

Next week we will see an attempt to establish a democracy in China totally torn apart by Communist lies and behind the scenes efforts to marginalize an attempt at democracy.  Unfortunately the countries that could have stopped this from happening decided to stand back and rely on an untried organization…the United Nations…to solve problems they did not want to have any involvement with.  Do we see such an attitude today with some of our church leadership?  Is the church relying on ‘separation of church and state’, which is actually a great hoax bought in by some politicians and church leaders, while others destroy the foundations the church relied on to maintain its status as free to meet and worship.

“Choosing to go our own way, we reject God’s authority over our lives and ‘turn things upside down, as if the potter were thought to be like the clay!”  Isaiah 29:16

PS – Another story of politics trying to control the church.  Pastor Tony Spell, Life Tabernacle Church in Baton Rouge, LA, continued to hold services in spite of vaccine and masks mandates.  These worship services were not mandatory and members of the congregation made their own decisions as to whether attend or not.  Pastor Spell was ordered to close down the church; he refused.  His comment: “My rights to have church and to preach the gospel of Jesus Christ are endowed to me by my creator, not my district attorney, not my chief of police, and not my governor.”  Pastor Spell was arrested two days later.  Anyone saying politics does not belong in the church did not keep the political operatives out of this church