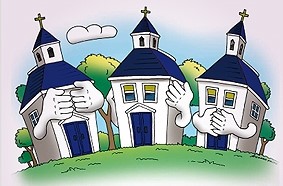 While some believe that the church should divorce itself from politics, you can bet that politics will not divorce itself from the church especially in today’s anti-God climate.  We are to handle adversity and hardship knowing that God is in control but that does not mean that we cannot call out injustice.  In Acts 16:35-37 the chief magistrates ordered Paul and Silas released.  “Go in peace” were the instructions they were given.  But Paul was not having any of that.  “They beat us in public without a trial, although we are Roman citizens, and threw us in jail.  And now they are going to smuggle us out secretly?  Certainly not!  On the contrary, let them come themselves and escort us out!”  [Acts 16:37].  In Southern vernacular Paul was giving law enforcement a version of, “Now wait just one cotton-picking minute.”  Paul was righteously indignant.  Not only did the magistrate escort him and Silas out of the jail, but they also apologized.  Justice was served.  Persecution didn’t disappear with those brave men.  In America during the past several years Christians have gotten their own taste of it, from their own government, no less.  Unfortunately in many cases the police escort and public apology never materialize.  Many Christians take a stand for what is right in the eyes of God and find themselves on their own up against ‘Caesar’. How many churches are willing to take a stand with these brothers and sisters in their fight against ‘politics’?

Here’s the story of a grandmother, Barronelle Stutzman, a devout Baptist, and owner of a flower shop.  In early 2015 she was being treated as Washington state’s Public Enemy No. 1.  The seventy-two-year-old Christian is opposed to gay marriage, and her religious belief could cost her her business, her life savings, and even her home. [Denny Burke,”A Florist Loses Religious Freedom, and Much More”, Cable News Network, February 20, 2015].  A Washington judge ruled in 2015 that Stutzman, the owner of Arlene’s Flowers, violated the law when she refused to provide flowers to a same-sex couple for their wedding. [Ibid].  If you disagree with the state…politics…you’re out of business.  The judge rejected arguments that her actions were protected by her freedom of speech and religion.  Judge Ekstrom determined that “while religious beliefs are protected by the First Amendment, actions based on those beliefs aren’t necessarily protected.” [“Judge: Washington Florist Who Refused Gay Wedding Broke Law”, The Seattle Times Company, February 18, 2015].  So, I guess it’s OK to believe in God so long as you don’t follow the tenets of your faith?  How many of our politicians fall into that category…just follow their voting record?  A Christian legal organization, Alliance Defending Freedom, has taken the case with no help from the local churches.  The attorney representing Stutzman called the ruling “terrifying”.  “A government that can force you to say something and express a message that is so deeply contrary to your core beliefs is terrifying”.  What I find even more terrifying are churches that don’t even know for sure what their core beliefs are.  The Washington Attorney General Bob Ferguson would appear to be on a crusade to destroy the Christian grandmother.  His message,”You better shut up if you disagree, or you are going to lose everything you own”.  The attorney general made a decision to seek legal fees and penalties not only from Arlene’s Flowers but also from Stutzman personally.  The law…politics…allows for penalties of up to $2000 per violation. [Ibid].  When the word got out to the gay community the flower shop was inundated with requests to provide flowers to gay weddings.  Each requests would be a violation.  That’s $2000 a pop!  The attorney’s fees, court costs, liable to the state, and ACLU could reach well into seven figures.  But don’t get the idea that the state is heartless.  The state offered her a deal… confess to your sin and pay a $2000 penalty plus one dollar and promise to never discriminate again. [“Florist Who Refused to Serve Gay Couple Rejects Settlement”, Cox Media Group, February 20, 2015].  She declined.  In her statement concerning the offer she said that they were asking her to walk in the way of a well-known betrayer, one who sold something of infinite worth for thirty pieces of silver.  That was something she would not do.  Further, she said don’t let someone bully you into doing what they want you to do if it’s against your convictions.  Remember when our elected leaders…politicians, pseudo-Christians…told us that same sex marriage would not impact anyone?  It’s clear that same-sex marriage does affect us.  It’s depriving people of their freedom…of their God given freedoms, to not be compelled to join in’pagan rituals’.  Stutzman’s case is still being adjudicated but if she loses she could lose not only her business but also her home and her life savings.  Think we can separate politics from the church?

The attacks by the God-hating atheists are not just limited to little old grandmothers.  Let’s take a look at the Benham brothers.  Twins David and Jason were in production for Flip It Forward. a show scheduled to debut on HGTV.  The North Carolina brothers’ show would have followed families creating their dream homes from fixer-uppers. [Jake Perlman,”HGTV Cancels ‘Flip It Forward’ Pilot Amid Hosts’ Anti-Gay Controversy”, Entertainment Weekly Inc., May 7, 2014].  After the network announced the show on the fall lineup, the militant group Right Wing Watch labeled David Benham, son of evangelical pastor Flip Benham…an “anti-gay extremest”…reported on comments he had made about homosexuality, abortion, and divorce. [Brian Tashman,”HGTV Picks Anti-Gay , Anti-Choice Extremist for New Reality TV Show”, Right Wing Watch, May 6, 2014].  The Benhams who are graduates of Liberty University were saddened to hear HGTV’s decision to cancel their show. Their comments,”With all the grotesque things that can be seen and heard on television today you would think there would be room for two twin brothers who are faithful to our families, committed to Biblical principles, and dedicated professionals.” [Lisa Respers France,”Benham Brothers Lose HGTV Show After ‘Anti-Gay’ Remarks”, Cable News Network, May 9, 2014].  Among the Benham’s trespasses were David’s leadership of a prayer rally outside the Democratic National Convention in Charlotte in 2012.  He made comments to Christian radio about the rally…”We don’t realize that if 87 percent of Americans are Christians and yet we have abortion on demand; we have no-fault divorce; we have pornography and perversion; we have homosexuality and its agenda that is attacking the nation; we have adultery; we have all of the things; we even have allowed demonic ideologies to take our universities and our public schools while the church sits silent and just builds big churches.  We are so complacent, we are so apathetic, and we are so hypocritical in the church.  That’s why the Bible says judgment begins in the house of God…we prayed…we asked God and our city to forgive us for allowing these things in the house of God.” [Tashman,”HGTV Picks Anti-Gay, Anti-Choice Extremist for New Reality TV Show”].  North Carolina was also one of those states that allowed individuals to decide what the public toilet ‘de jour’ was going to be.  This situation is a classic case of LGBTQ activist trying to marginalize and silence others.  The message to the American public…anybody who does not get on board with their point of view does not deserve a place in the public square. [Janet Mefferd, Salem Radio Network, in communications with Todd Starnes, May 2014].

Once again the silence of the church is ‘deafening’.  A small group with an agenda can out distance churches who claim to have millions of members…makes one wonder!  Next week we will look at some of the attacks on our public schools.  In some cases if it wasn’t for a few Christian students these attacks would be totally successful…and no thanks to our public school leadership.