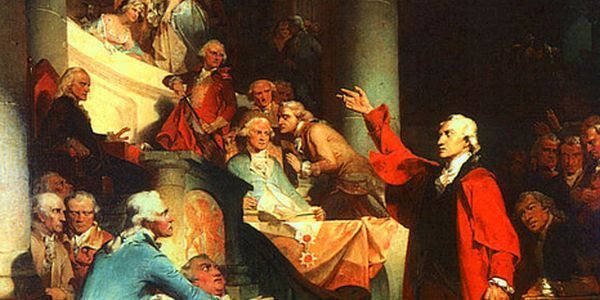 This week we will take a look at the responsibility of citizens when government goes beyond the bounds set by the Constitution and the will of God for the purpose of government.  President Thomas Jefferson once stated: “When once a republic is corrupted, there is no possibility of remedying any of the growing evils but by removing the corruption and restoring its lost principles; every other correction is either useless or a new evil.”  There are times in a life when doing what is ‘right’ is more commendable than saving one’s ‘skin’ by obeying the laws of a corrupt civil government…go along to get along.  If civil government is to be “God’s servant for your good” (Rom. 13:4), then government exists for the good of the people, not for the good of the king or the emperor or the president.  In the Old Testament, Samuel demonstrated this principle well during his service as judge, as at the end of his judgeship he said to the people of Israel: “Here I am; testify against me before the Lord and before His anointed. Whose ox have I taken?  Or whose donkey have I taken?  Or whom have I defrauded?  Whom have I oppressed?  Or from whose hand have I taken a bribe to blind my eyes with it? Testify against me and I will restore it to you.”  They said,”You have not defrauded us or pressed us or taken anything from any man’s hand.” (1 Sam. 12:3-4).  In contrast though, he warned the people that a king would abuse his power and take from the people for the benefit of himself and his family. (1 Sam. 8:11-17).  This use of government for self enrichment of the leaders and his family and friends betrays the fundamental purpose of government to serve the people.  It is repeatedly condemned in the Old Testament (Deut. 16:19; Ps. 26:10; Prov. 15:27; 17:23; Isa. 33:15; Ezek. 22:12; Amos 5:12; Hab. 1:2-4).  Sadly, the more unchecked power a government has, and the less public accountability it has to the people, the more likely a ruler is to forget this principle and to ‘take’ more and more to himself, just as Samuel warned that the king would do.

Because God has established the government to restrain evil and do good for the nation, citizens should, in general, be subject to the government and obey its laws. (Rom. 13:1-2).  Similarly, Peter tells Christians to be subject to government laws. (1 Peter 2:13-14).  God does not hold people responsible for obeying the civil government, however, when obedience would mean directly disobeying a command of God Himself.  There are several examples in the Bible where men had to disobey the laws of man.  In the early days of the Christian church, Jesus had commanded the apostles to preach the Gospel. (Matt. 28:19-20).  The Jewish governing authority, the Sanhedrin, arrested some of them and commanded them “not to speak or teach at all in the name of Jesus” (Acts 4:18).  The apostles Peter and John answered,“We cannot but speak of what we have seen and heard” (Acts 4:20).  Later Peter proclaimed,“We must obey God rather than men” (Acts 5:29).  This is a clear affirmation of the principle that God requires His people to disobey the civil government if obedience would mean disobeying God.  Other passages establish this principle.  In Daniel 3:13-27, King Nebuchadnezzar commanded three Jewish men to bow down and worship a golden image he had erected.  They refused.  God showed His approval by rescuing Shadrach, Meshach, and Abednego from the burning fiery furnace. (Dan. 3:18-30).

When Pharaoh commanded the Egyptian midwives to put new born Hebrew baby boys to death, they disobeyed with God’s approval. (Exod. 1:17,21).  When it was against the law for anyone to come into the presence of King Ahasuerus without being invited, Esther disobeyed the law and risked her own life to save her people, the Jews. (Esth. 4:16).  Daniel disobeyed a law that prohibited him from praying to God. (Dan. 6:10).  When King Herod commanded the wise men to return and tell him where the new born king of the Jews was to be found, they were warned by an angel not to obey this command, so they disobeyed King Herod and departed to their country by another way. (Matt. 2:8, 12).  These are just a few Biblical examples of how men/women have had to take a stand against tyrannical government.  But now let us move on to when rebellion was required by peace loving people to regain their God given rights.

Sometimes people raise the question of whether it was right for the early American colonies to declare their independence from Great Britain.  Was this not showing a failure to be subject to governing authorities?  Was it, therefore, an act of disobedience to God’s command in Romans 13?  Some Christian writers even go so far as to say, “The United States was actually born out of a violation of the New Testament principles, and any blessings that God bestowed on America have come in spite of that disobedience by the Founding Fathers”. [John MacArthur,“Why Government Can’t Save You: An Alternative to Political Activism”, Nashville: Word 2000, pgs. 6-7]. At the time of the American Revolution, a number of Christians agreed and some left the American colonies and returned to England to be subject to the British crown rather than participate in the Revolution.  However, others thought that the American Revolution was morally justified in the sight of God.  The reason is that it was considered morally right for a lower government official to protect the citizens in his care from a higher official who is committing crimes against these citizens.  Such thinking in Protestant circles goes back as far as John Calvin in his Institutes of the Christian Religion (1559). Other Lutheran and Reformed thinkers made similar comments along with the words of Roman Catholic philosopher Thomas Aquinas (c. 1225-1274).  One common element among Christian writers was that a ‘tyrannical’ government is not a government at all but a criminal gang masquerading as a government, and is therefore not entitled to the obedience that legitimate governments can claim.  Another argument was that the principle of the rule of law implies the right to rebellion.  Leaders who founded the United States and declared its independence thought of themselves as doing something that was morally right and even necessary to protect citizens from the evil attacks of King George III who had repeatedly acted as a ‘tyrant’.  The Declaration of Independence contains a long statement of grievances against England.

Another argument for seeking to change government is the general principle that the Bible does not ever say that it is wrong to change an existing government.  Even today citizens seek to change government through elections. Could it ever be right to change governments through other means?  The Bible says that ruling officials have been “appointed” by God, but God certainly works through human actions to appoint different leaders at different times.  The whole history of Israel shows how God worked again and again through many significant events to remove one king from office and establish another.  The Bible gives some examples where God raised up leaders to deliver His people from the rule of tyrants. [Exod. 1-14; Judg. 2:16; Heb. 11:33].  Founding Father Benjamin Franklin’s proposal for the Great Seal of the United States included the motto: “Rebellion to Tyrants is Obedience to God”. [www.greatseal.com/committees/firstcomm].  In conclusion, the Declaration of Independence, like the American War of Independence, was morally justified and was actually necessary in order to free the nation from the tyranny of the King of England.  Much of the encouragement for this declaration was initiated right in the pulpits of numerous churches…back in the days when the church took responsibility not only for the souls of people but their very well-being while here on earth. Today we see ‘corruption’ trying to correct ‘corruption’.  It has never worked and never will.  It is up to our churches to re-infuse those lost principles that were the foundation of this nation.  It will come from no other source and the state of our society will only continue to deteriorate without it.

Next week we will look at God’s intention for government to safeguard human liberty and what happens to human liberty when morals get out of control.