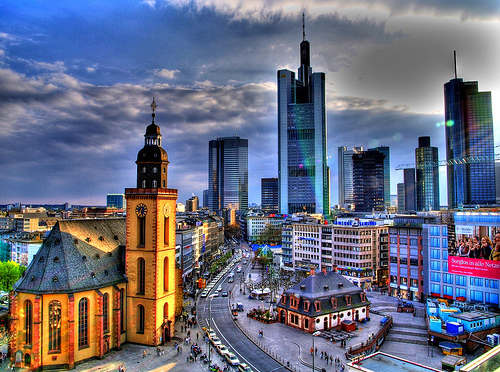 For the past several weeks we have taken a look at morals and ethics in this nation and how they have evolved from the Judeo/Christian based beliefs of our founders to the society we have today.  God’s Word…the Bible…was the basis for most of those early foundational morals and ethics.  The Bible, as we know it today, has gone through many evolutionary stages but for the most part still in keeping with the original manuscripts that have been recovered over many years.  I have often wondered what the differences were in the many versions.  This week I will try to do a ‘brief’ outline on how the Bible got to where it is today.

Numerous Bibles and manuscripts have existed for millennia in various languages, such as the D! ead Sea scrolls, Septuagint, etc.  The first English language Bible came much later.  It was a handwritten copy made by British theologian John Wycliffe in 1384.  He translated the Latin into English.  At the time it was illegal to put the Bible into a language that the common man could understand so after completing the translation he had to flee for his life.  His translation contained 80 books, including the New Testament, Old Testament, and Apocrypha.  Until almost the twentieth century English Bibles, whether Protestant or Catholic, included 80 books unlike the 66 that are considered today to be the authoritative canon of Scripture.  The Apocrypha is largely considered as a Roman Catholic part of the Bible.

In 1440, Johannes Gutenberg invented the moveable type printing press.  This made it possible to print thousands of Bibles at one time.

In 1525, William Tyndale of England printed the world’s first English New Testament.  Bibles in the common language were still illegal.  For any person found in possession of Tyndale’s New Testament, the penalty was death.  Officials gathered as many as could be found and had them burned.

In 1535, Myles Cloverdale, one of Tyndale’s disciples, took Tyndale’s New Testament and added to it the Old Testament and Apocrypha, thus printing the first complete Bible in English.

In 1537, John Rogers printed the second complete English Bible, but it was the first one translated from the original Biblical languages of Greek and Hebrew rather than from Latin.  Because of the danger he faced, he used the pen name ‘Thomas Matthew’, and his version of the! Bible became known as the “Matthews Bible” and contained 80 books.

In 1539,  Thomas Cranmer, head of the Anglican Church under King Henry VIII, contracted with Myles Cloverdale to publish the “Great Bible”, the first English Bible that was officially authorized for public use in common language.  It was commonly called a “pulpit Bible”.  When King Henry’s daughter, Mary, came to the throne, she burned both John Rogers and Thomas Cranmer at the stake.

In the 1550’s persecuted leaders such as Myles Cloverdale and John Foxe went to Geneva, Switzerland, and joined with reformers John Calvin,  John Knox and others to produce a Bible that could be used by exiled Christians in any country.  In 1557, they printed a New Testament and in 1560, the full Bible.  Because it was printed in Geneva it was titled the “Geneva Bible”.  It was the first Bible to have numbered verses for each chapter and, it too, contained the Apocrypha.  The Geneva Bible became the popular Bible of those who objected to corrupt practices of both State and Church, known as ‘Dissenters’.  From 1560 to 1644 the Geneva Bible went through 140 editions.  It was the first Bible to be taken to America.  One distinctive feature of the Geneva Bible from all other Bibles at the time, was marginal commentaries on the Scriptures.  Written by prominent reformers, these commentaries challenged the culture, especially those traditions and practices that violated God’s Word.

In 1582, the first Roman Catholic New Testament was printed in English.  Because it was translated from the Latin at a college in Rheims, France, it was known as the “Rh! eims”.  Then in 1609, the Old Testament and Apocrypha were translated from Latin at a college in Douay, France.  Combining the two, it became the first printing of the full Roman Catholic Bible in English, known as the Douay-Rheims Version.

In 1604, English clergy from the Church of England, asked King James I for a Bible version that would replace the “Bishops Bible” and rival the “Geneva Bible”…without commentaries.  Fifty scholars convened and consulted a number of earlier versions including Tyndale, Cloverdale, Matthews, Great Bible, Geneva, and Rheims in producing their new Bible…the King James Version.  When it came off the presses in 1611, it became the official Bible of the realm and was chained to the pulpit of every English church.  The King James Version, less the anti-king commentaries of the Geneva, was actually a very accurate translation of the Bible and to this day stands as the most printed book in the world.

In 1661, John Eliot of Boston printed a New Testament in the Algonquian language and in 1663 he printed the full Bible…the first Bible to be printed in America.

In 1743, Christopher Sauer of Germantown, PA, printed a Bible in German from a Martin Luther translation of 1534.  His most famous version was printed in 1776.  He printed 3000 copies before the British occupation.  The troops seized most of the Bibles and used them for firewood and bedding for their horses.  They also tore pages from these Bibles to use as wadding in their guns.  Only a few of the Bibles survived and are known as “Gun Wad Bibles”.

In 1765, America’s first Thumb…or miniature… Bible wa! s printed, so-called because its measurements were only 1.3 inches by 1 inch.  It was an abridgment  of the Bible for children.

Because of British policy banning English-language Bibles from being printed in America, America had to import Bibles from England.  In 1777, because of British blockade, America started to experience a shortage of several important commodities including Bibles.  On July 7, 1777, a request was put before the Continental Congress to print or import more Bibles.  Congress agreed and a committee assigned to tackle the problem came to the conclusion that it was cheaper to import than print, so Congress agreed and ordered the Bibles imported.  They imported 20,000 from Scotland and Holland.  The import could not keep up with demand.  So in 1781, Robert Aitken, a publisher, petitioned Congress for permission to print Bibles thus negating the necessity to import them.  In 1777, he had printed America’s first English-language New Testament, reprinting it in 1778, 1779, 1780, and 1781.  On 12 September 1782, his proposed printing of the whole Bible was approved by the full Congress with a congressional endorsement in front.  Known as “The Bible of the Revolution” it was the first English-language Bible printed in America.

In 1790, Matthew Carey published the Douay-Rheims version, the first Roman Catholic Bible printed in America.  It only had 76 books, as he left out 4 from the Apocrypha.

In 1791, Isaac Collins produced a large Bible known as America’s first family Bible.  Its introduction was! penned by the Rev. Dr. John Witherspoon, a signer of the Declaration of Independence and president of Princeton.  It was essentially a King James Version but Witherspoon saw no reason to acknowledge a king, after all it was God’s Word not King James’ word.  Also printed in 1791 was the Isaiah Thomas Bible, America’s first illustrated Bible.

In 1808, Charles Thomson published the first translation of the Septuagint into English.

In 1842, the American Bible Society printed the first Bible for the blind.

In 1858, the American Bible Society printed a special edition of the Bible for William Russell, William Waddell, and Alexander Majors…the owners of the Pony Express…with a distinct imprint on the front of each cover and a copy was given to each rider.

In 1861,  the American Bible Society distributed several million pocket Bibles to both Union and Confederate troops.  In 1864, President Lincoln acknowledged that the troops of both armies “both read the same Bible and pray to the same God”.

In 1881, the Revised Version of the King James New Testament was introduced.  It compared and corrected the original King James by using ancient manuscripts that had been discovered since 1611.  In 1885, the Old Testament was printed and in 1894 the Apocrypha was completed.

In 1973, the New International Version was published as a phrase-for-phrase rather than word-for-word translation of the Bible.  It was designed for ease of reading.

In 2002, the English Standard Version was published in an attempt to combine the accuracy of the New American Standard Bible with the readability of the New International Version.

A note on the Apocrypha : it is a group of books written from about 190 B.C. to about A.D. 210.  These books fall into two main divisions…the Old Testame! nt and the New Testament apocryphal books.  The Old Testament books were excluded from some early versions of the Old Testament but included in others, which in part explains why Bibles used by Roman Catholics contain the Old Testament Apocrypha, while they are no longer included in most Protestant editions of the Scriptures.  None of the books were found in the Hebrew canon; they were never quoted by Jesus and it cannot with certainty be affirmed that the apostles ever directly allude to them.  The New Testament apocryphal books were written long after the death of the apostles and other eye-witnesses to the life and ministry of Jesus and not considered authoritative by officials of the early church.  Martin Luther regarded the Apocrypha as profitable and good to be read but not equal to the Holy Scriptures.  While these books may be useful and were attributed to the work of Godly men, they are not inspired writings on the same level as the 66 books of the Bible.

As you can see, the evolution of the Bible has had a long history.  Man has had a close relationship with God’s Word for a long time.  It has been inspiring and a guide for many throughout good times and bad.  For those who have not done so already, it’s time to knock the dust off the family Bible and get into it.  It can once again save this nation.

Next week we will start a series “Reversing Course… Avoiding the Shoal Waters”.  What will need to happen to avoid disaster?